It was on a Saturday night that we had a special dinner with dishes from around the world, and we had to attend wearing our national costumes. It was incredible to see all those people, who you already love although you only know them for a week, wearing such amazing costumes. Here's a couple photos:

The Czechs and I

After dinner, they took us all to the big gym and made us wait for some time until the second years were prepared to perform... and how they performed. They sang, acted, but most of all, they danced. They danced a lot, and incredibly well. It became obvious that UWC is full of artists, at least their generation. I can't imagine myself in their place next year!
I've just posted a request on Facebook so that somebody lets me know if they have videos of the event.
After the performances we had a little time to prepare for the CANTEEN PARTY!!!!! A disco set in the canteen, everyone dancing in the middle, it was so much fun! Though it was then that I figured out the difference between discos here and back home: there, you can exit the disco and get some fresh air. Here you can't.
But it is still bearable.

It has been a long and exhausting week, full of presentations, information, and names, LOTS of names. But it might be one of the best weeks I've ever lived. I immediately found very good friends in Laci (Hungary), Lorenzo (Italia) and Tomi (Finland). However, as the days passed by, I met more and more people, meaning more and more friends. There is a kind of brotherhood at LPC that everybody shares.We've seen some great dance and music shows, we've been to a camp (we had to hike for uncountable hours, I don't really know how I'm still alive), had 4 showers each day, attended meetings about LPC life, socialized with our Block and Tutor Group, set up bank accounts, got HK ID Cards, played pool games, danced in the canteen and the students' common room in the A Block... We have had some free time that we've used to go around the place by MTR (Underground) and buy stuff, or to work out a little in the gym, or just to socialize a bit more.
Publicado por Guillermo Martínez en 0:07 No hay comentarios:

I've already been here for a week and the only way to describe it that I've found is saying "UWC". A new life has begun, full of new friends and experiences. I'll start writing from the beginning. I left from Madrid on Friday 3rd September 15:25. It was not possible to contain the tears when saying goodbye to my parents, but, why contain them? So after saying goodbye, I entered a new life. An independent life. Now it's me who cares about myself. I was a little worried because my boarding time was 14:40 and I went through the x-rays and metal detectors around 14:20, and when looking for the gate, the signals said that they were 22 minutes away. I had to take this little train, but finally arrived in time. I boarded and tried to start developing my English skills by watching Prince of Persia, which was a nice film but not a work of art.
When I landed in Dubai, I directed my steps to the next boarding gate and used the iPod to go on Facebook chat and find Maroua Sallami, my co-year from Tunisia. I sat in front of her and both of us took our computers and Skyped with family and friends, until Nasser Karmali, French, appeared. We talked for a while, and boarded (unfortunately, we weren't sitting together). Many hours later we were arriving at HONG KONG INTERNATIONAL AIRPORT!!! FINALLY THERE!! The feeling was delicious: three teenagers in a completely unknown airport. After the immigration control and the baggage claim, we went to the "Arrivals" Gate, where there was a bunch of 2nd year LPCers. After introducing ourselves, some went to Starbucks, some to Burger King, and then took a bus near to LPC and then a taxi. It was around 8 in the evening, and by 7 it was already night, so we couldn't see much. I almost didn't have time to see my room, I just left the baggage, said hi to my roomies (Jia Jun, Malaysia, and Jonathan, Hong Kong. On Sunday Thomas Chen, Hong Kong, would join us). Then, we took another bus to Sai Kun, the nearby town, where a lot of people were having dessert at Honeymoon's, but it was full when we arrived. Lots of names and nationalities, maybe I got some, but there are still many names I have to learn. It was so great to be with so many different people, we just hung around, had something to drink and walked along the pier. That night I would collapse onto my bed and immediately fall asleep.
Publicado por Guillermo Martínez en 23:53 No hay comentarios: 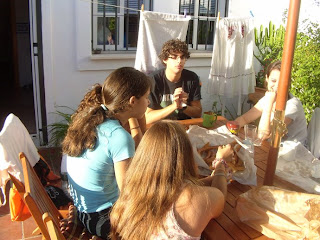 Yep. I've already left home, though I'm still in Spain. I've left Sevilla and the hot dry weather and come to Galicia, at the North of Spain, where it's raining. I'm here to see the family, to attend the baptism of a cousin and, of course, to see MUSE! Though seeing Muse was the last thing I knew about. And it's still the least important.
I've already waved goodbye to all my friends in Espartinas. The last night together we went out to have dinner as usual, but ended "sleeping" two houses away from mine, as my childhood friend Mª Ángeles invited us to spend the night there. And so we did, and we had churros for breakfast!
I went home two or three times to see if Dad had everything prepared and help him, and to take a shower. I had already said goodbye with the dawn to Juan, Chema and Jesús. As I said, it's not really goodbye. It's see you later.
The last time I came to Mª Ángeles' house they sang me "There's a Friend in Me", the one appearing in Toy Story. It was so beautiful, though Rebeca was too tired to sing properly ;D
And I left... I've been seeing them everyday for years and now I won't see them 'til December. Sometimes, you have to leave everything you knew and go find something else.
Life's like this.
Publicado por Guillermo Martínez en 14:48 No hay comentarios:

At the time of the Selection, they took around 20 of us (they did it in different times, Friday morning/afternoon/Saturday morning, I was in the 2nd group) to a room where we completed our "General Culture" tests. Nothing I had studied was there. Anyway I think it didn't go so bad, there were some things I knew. Then a psychological test which was just choosing answers a, b, c or d.
After that, we brought the chairs to the corners of the room and played some games to get to know each other, while they called some of us for the Personal Interview and the Social Project Presentation. I spent the whole evening there. I thought I had done everything quite well, and so went back to my aunt's house.
On Saturday we had to go again to that hotel, and they said the names of the 20 of us that went on to the next stage. In the evening, we had some dinner together and played more games, but now with almost an ex-student for each applicant (all the games were taught by them, as they were the organizers). Alright, I can still remember that the last game was about "selling" each college (in pairs) as a touristic destination. Carol, the Spanish friend who's also coming to LPC, got a fantastic idea and we "sold" the Adriatic College.
On Sunday, we had to go again in the morning to have another personal interview, and so I did. It didn't go bad, and on the afternoon we got into the car and drove back to Sevilla, waiting for the call that would confirm either if I was chosen or not.
It finally came, and they told me that there hadn't been luck. I wasn't chosen for the scholarship.
That was worse than a punch in the stomach. We were sure that I would go to Canada (with "we", I mean my parents and I), but then I had to stay and go study in Olivares, a nearby town.
However, I tried to be strong and accept it, and that's what I did.
But my parents are not like that. They would not stop if they wanted something. So they wrote a letter to the Committee, and asked if there was any way that I could go to the colleges. In normal circumstances, well, I could pay, but I don't have the money. But there were 11 chosen, and I was number 12. So they said that if we could find financing by a week I could still go.
They searched, working really hard. Giving phone calls, sending e-mails, they finally got it. And then I got the call. I was going to Li Po Chun United World College of Hong Kong. Still today, I find it unbelievable.
Publicado por Guillermo Martínez en 7:41 2 comentarios:

Five years ago, when I was 11, my father found them on the Internet. He saw what these colleges were: a place to meet people from really different cultures, and to make friends around the world. He saw the importance this colleges gave to good education, emphasizing not only on studying but on making us collaborate, understand, and live along with others. Resuming, it was a place where you could start a life apart from your parents and become an independent person who cares about the world, who wants to improve other's lives and who wants to study. And my father liked it.
He showed it to my mother, then to me, and I said "Yeah, I like it", and that's all. I hadn't given it all the importance it has, but it was my objective to become a UWCer.
As the time to apply for the scholarship approached, my excitement grew. I saw the college in Canada and totally fell in love with it, with the activities they did, with the kind of life those students had.
And the time to send the application form came. I worked hard on it, thinking of which answers would be the best. I wrote a very sensitive but strong essay about the life of one friend of mine, Mol Pao, who lives in Cambodia. His is a story I will have to tell.
So I completed all the pages on the form, read them four or five times and then showed it to my parents. We looked at them together again and corrected some things. After a week correcting little details, we sent the form to some psychologist friends we have so they could tell us their impression. We still changed a few things, and finally sent it.
Months passed without news.
I had just arrived from school and was having lunch when my cell phone rang. I wondered who it was and was tempted to ignore it, but I answered. It was the Spanish Selection Committee!
And they told me that I could go on to the next stage on the selection. From 560 applications, 50 people went to Madrid on the same weekend. I lost some classes preparing myself, searching about current events, studying history and literature and memorizing by heart the Social Project I had to present and I had already sent by e-mail.
Publicado por Guillermo Martínez en 7:15 No hay comentarios:

Guillermo Martínez
Moving around the world.
Science and the Universe, Earth and Nature, Music and Arts, are my biggest passions. Traveling, learning, living, my hobbies.